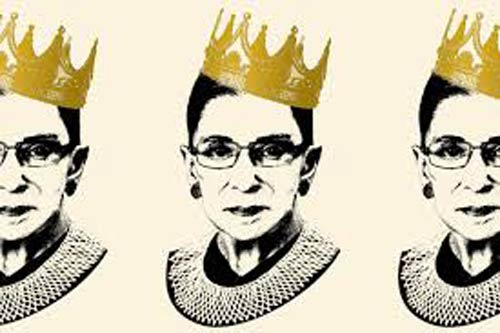 You may not know it, but I was a hip-hop journalist. I interviewed some of the greatest hip-hop artists of all times, including Public Enemy’s Chuck D; wrote ad campaigns for LL Cool J, Run DMC and EPMD. I even modeled for a Japanese fashion magazine with rapper, Q-Tip. (50% of you know what I am talking about. 50% have no idea.) Nevertheless, what I loved most about my time submersed in hip-hop culture was seeing young men who often came from nothing, rise to prominence right before my eyes. You know how they did it? They believed in themselves, no matter what the world said to them or about them. They taught me what it means to have swagger.

“Swagger,” of course is not a word that is often used for an 87-year old, 5’1 lady from Brooklyn, New York who happened to be one of only two female Supreme Court Justices. She was “fire.” She was a fighter that we will never forget, especially in these troubled times where so many of our hard-won rights are slipping right out of our hands.

Ruth Bader Ginsburg, a.k.a. known as The Notorious RBG, was a giant presence and her name and image will never be forgotten. In 2013, a NYU law student, Shana Knizhik, created this impossibly incongruous moniker for this highly respected legal icon. Taking cues from the lost rapper, Biggie Smalls, Shana managed to borrow the rap legend’s nickname and lend it to the Supreme Court judge, knowing that it would help expand her audience beyond the courtroom, where it was needed most. I am so proud to have lived during her lifetime and truly sad that she is gone.

There is just something about people who are so self-realized that they can diminish their identity down to a few letters, and everyone still knows who they are. When I remember all of the talented artists that I met in my music industry days, what is unforgettable is that no matter where they came from, they knew their own greatness. Their minimized names showed that they were not only loved, but they loved themselves. Now, that’s what I call swagger.

RBG stood for something. She was a giant in a tiny body. She was loud with a small voice. She stood for many things that the patriarchs didn’t appreciate but was willing to fight tooth and nail for women, the oppressed and what is right. She was determined to make room for women on this earth. She was a woman on a mission, which is what the rappers often said about themselves.

Which brings me around to you…What is your mission? What do you fight for? Tell me your initials and do you dare use them? Will people know who you are without your whole name spread across the page? Where have you made an impact? I know you have, but do you even know how great?

This weekend, have a little fun in homage to RBG. Just use your initials wherever you go and see what happens. They’ll see you in a whole new way. Believe me, you have made your mark. If not, then start.

Leaving you to remember your greatness.